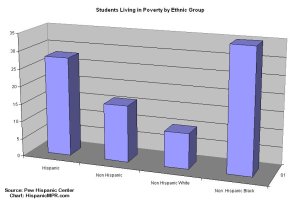 In addition, Hispanics are already the largest minority group in the public schools in 22 states. The growth is particularly evident in states which have traditionally had large Latino populations. For example, while in 1990 Latinos represented 36 percent of the public school population in California, by 2006 50 percent of all students in that state were Latino.

In 2006, in Arizona, Mexico and Texas more than 40 percent of enrollments were of Latino students. That same year, in Nevada, Colorado, Illinois, Florida and New York between 20 percent and 40 percent of students were Hispanic.

According to newly released U.S. Census Bureau demographic estimates, Hispanic student enrollment is likely to continue to grow for many years. Researchers believe that by 2050 there will be more Hispanic children than non Hispanic white children.