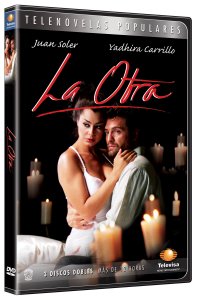 Earlier this year Xenon Pictures and Televisa Home Entertainment in cooperation with Lionsgate Home Entertainment, released the 2003 telenovela La Otra, winner of the 2003 TVyNovelas Award for Novela of the Year. The three-disk set includes the best episodes of the serialized program. The DVD package in Spanish with English subtitles of La Otra sells for $19.98.

La Otra is the story of Carlota, the illegitimate daughter of Bernarda and a millionaire named Leopoldo, who left a fortune to Carlota and her half-sister, Eugenia. Although Bernarda tries to keep her daughters from marrying so that she can continue to live off of their inheritance, Carlota marries Dr. Alvaro Ibañez, and Eugenia becomes pregnant with the child of Roman, Leopoldo’s deranged son.

Eugenia dies in childbirth, but Bernarda convinces Alvaro that it was Carlota who died. Devastated, he moves to the country to live with his father, where he meets Cordelia, identical in appearance to Carlota. Social-climbing Cordelia takes advantage of Alvaro’s grief, and marries him for his wealth and position. In the meantime Carlota is trying to get her husband back.

Established in 1986 and headquartered in Santa Mónica, California Xenon Pictures Inc. is a distributor of urban programing in Spanish in the United States and the exclusive distributor of Mexican Grupo Televisa under the label Televisa Home Entertainment.