Pat Hensley and Jose Amaya accepted the award for Hy-Vee 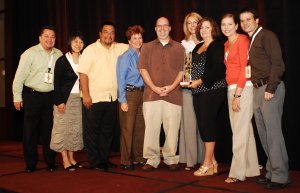 The awards, based on a poll of more than 1,000 Hispanic-focused retailer and supplier executives, including members of conference’s 22-company Retailer Advisory Board, are designed to recognize leadership among retailers targeting the growing Latino population.

Poll recipients were asked to write in the name of the retailer in each of six classifications (Drug Stores, Convenience Stores, Grocery, Mass Retail, Specialty Stores and Department Stores) that “has done the most in the past year to win the hearts, minds and spending dollars of Hispanic consumers.” There were 100 responses to the poll and 12 companies received votes. 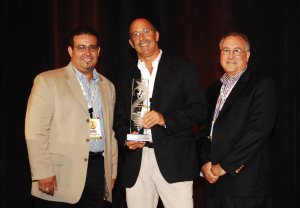 The Advisory Board, representing retailers with more than 42,000 stores and more than $190 billion in annual revenue, also heavily influenced the content of the conference program. The board includes retailers from varied channels of retailing and food service such as ExxonMobil, Giant Eagle, McDonald’s Corp., Minyards, SuperValu, and Winn-Dixie.