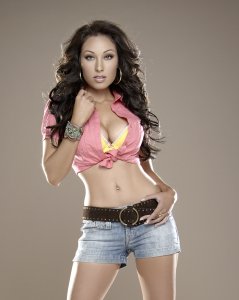 LATV recently contracted Yolanda Perez, who is well known in banda music circles, as the new host for its 30-minute regional Mexican music program, Mex 2 the Max. During the program, Perez is tasked with conducting interviews, introducing live performances and hanging out with celebrities on Mex 2 the Max, which airs Monday to Thursday from 9 p.m. to 9:30 p.m. PT.

“Yolanda Perez brings a true insider’s perspective to Mex 2 the Max, one of LATV’s signature shows. She is our audience, hip, bilingual and bicultural,” said Luca Bentivoglio, vice president of Programming, LATV. “Her star power and natural appeal made her the perfect choice to head up this regional music favorite. It’s a great coup for us.”

Born in Los Angeles, California Perez comes from a family steeped in banda music lore. Her music style mixes the traditional elements of banda with hip-hop and rap. Known as La Potranquita (Little Filly), she transitions from Spanish to English in her music. Her fifth and most recent album is titled Todo de Mi (All of Me, Fonovisa Records).

Pérez first gained popularity in 2003 with the song Estoy Enamorada (I’m in Love), playing the sassy daughter in a duet with cranky radio character Don Cheto. Talking back in Spanglish, Pérez vows to stand by her boyfriend.

Pérez is the first child born in the United States to immigrants from the Mexican state of Zacatecas. She grew up in Montclair, where her mother worked in a carpet factory. At home with her parents, she spoke Spanish and listened to Banda El Recodo and Tucanes de Tijuana. With friends at school, she spoke English and listened to Alicia Keys, Lauryn Hill and Tupac Shakur.

Headquartered in Los Angeles, LATV has been on the air in the Los Angeles market since 2001 and launched nationally on April 23, 2007. LATV Networks, LLC is owned by Costa del Oro Media. LATV is ad-supported and offers original and live programming, music, lifestyle and entertainment.