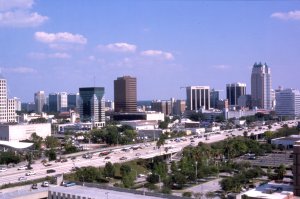 Partly because of Miami’s world renown as a Latino hub, and partly due to Orlando’s image as theme park destination, that central Florida city is often overlooked by marketers targeting Latino consumers. About 500,000 Latinos live in the Orlando, Daytona Beach and Melbourne area, representing about 21 percent of the market, according to the Metro Orlando Economic Development Commission. Some are starting to take notice of this area’s diverse population.

As traditional media targeting mainstream audiences continue to slash staff in a seemingly never ending quest to survive, Orlando media, realizing almost a quarter of their audience is Hispanic, are beginning to pay attention to the growing demographic, reflecting a national trend. 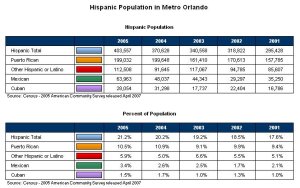 Hispanic Population in Metro Orlando – click on image to enlarge

From a media perspective, the metropolitan area ranks 19 in the Neilsen Media Research Designated Television Market Area (TV DMA) and 34 in the Radio Metro lists. In 2007, Entravision Communications bought an FM station, WNUE, marking the eleventh urban area where the company owns radio and television stations. Santa Monica based Entravision owns WVEN, the local Univision affiliate and operates WOTF, the Telefutra station, providing Spanish speakers in the area more than one viewing option.

WNUE’s popularity is starting to show. Last fall, the station tied with WRUM-FM, the Clear Channel station, for top Spanish station. It’s no wonder with half of the state’s 750,000 Puerto Ricans living near Disney, according to an online source. After Puerto Ricans, Latinos of Mexican, Colombian and Dominican origin are the most common.

According to a 2007 report by Fishkind & Associates, Inc., Central Florida’s Latino population is growing at a faster pace than other segments of the population. The researchers project the Hispanic community will grow at a rate 2 to 4 percent higher than non-Hispanics by the end of the decade.

The researchers also believe that 41 percent of Osceola County’s population will have Hispanic roots by 2009. At the same time, over the past seven years personal income for the area’s Hispanics rose 64 percent and is projected to increase an additional 12 percent by 2010 to reach $10.5 billion or more.