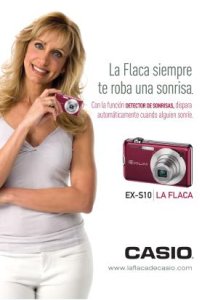 Casio executives recently decided to introduce one of their products to Spanish speaking Latinos in the United States for the first time. Revolucion NYC won the account with an ad campaign touting the benefits of the EXILIM EX-S10, a thin digital camera, and recruiting television celebrity Lili Estefan, known by her nickname La Flaca, as spokesperson.

“Why don’t we have La Flaca selling another flaca,” said Amy Gomez, managing partner and director, Account Services at Revolucion NYC about the brainstorming session where the campaign was born. “Two weeks after that thought we were shooting in Miami.” 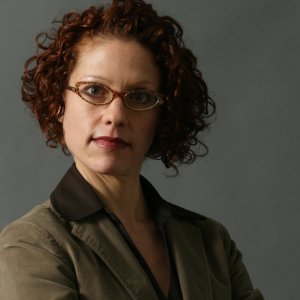 Spanish speaking residents of Los Angeles and Houston who see the banner ads are driven to a microsite created by the agency. Consumers are invited to purchase the camera at retail stores, especially through Best Buy and La Curacao, two program partners.

According to Gomez, after trying out the camera for the first few days, Estefan was so enthusiastic she requested 15 more cameras to give as gifts to her friends, and volunteered eagerly to assist in the public relations efforts for the camera.

The agency produced seven different ads, each one boasting about a different feature, according to Roberto Alcazar, executive creative officer at Revolucion NYC. It took three creative team members two months from beginning to end to create and develop the ads. The team members were Alcazar, Josefina Fuster, and Alberto Rodriguez. The photos were taken at Kikor Studio in Miami.

“Revolucion presented us with an integrated, turnkey approach to bring this unique product to the market,” said Sue VanderSchans, director of Strategic Communications and Marketing, Casio America.

Plans are to add Miami and one additional market and restart the campaign in October 2008 in time for the holiday season. The camera sells for $249.99 and is 3.71 inches wide by 2.15 inches tall and .59 inches thick. At its thinnest it is 0.54 thick, giving rise, according to Gomez, to the camera’s Spanish language nickname of la flaca. The weight, excluding battery and accessories, is 3.99 ounces.

Revolucion Hispanic Communications is a seven year old Hispanic-owned brand-communications agency based in New York City. The Japan based Casio Computer Company Ltd. was founded in 1957 and has 13,202 employees.