Watch video – Film about family and immigration released on DVD 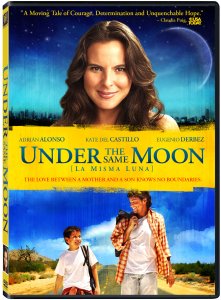 Under the Same Moon DVD cover

On June 17, 2008 Fox Entertainment released Under The Same Moon (La Misma Luna) on DVD, a story about the journey of a boy from Mexico to the United States to find his mother. The 106-minute film in English and Spanish, a 2007 Sundance Film Festival Crowd Pleaser, was first released in the United States in October 2007 and again in March 2008. The DVD sells for $29.98. Scroll down to watch video trailers of Under the Same Moon.

Under The Same Moon portrays the parallel stories of nine-year-old Carlitos (Alonso) and his mother, Rosario (Del Castillo). Hoping to make a better life for her and her son, Rosario works illegally in the U.S. while her mother cares for Carlitos in Mexico. Unexpected circumstances drive Rosario and Carlitos to embark on their own journeys in an attempt to reunite. Along the way, mother and son face challenges and obstacles while maintaining the hope of being together again.

Under The Same Moon is presented in widescreen format with English, French and Spanish subtitles, and includes commentary, deleted scenes and two featurettes. Bonus content includes The Murals of Under the Same Moon Featurette and The Making of La Misma Luna Featurettes.