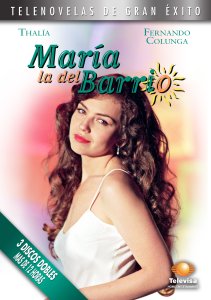 Xenon Pictures, in association with Lionsgate Home Entertainment, recently released the telenovela Maria la del Barrio on DVD. The Spanish language soap is part of a three part series in actress Thalia’s Maria Trilogy. The other serialized program, MariMar, was released earlier this year and the third part, Maria Mercedes, is due for release on DVD this summer.

Some fans consider that this series launched the famed Mexican soap actress into international stardom. Maria la del Barrio was also the first starring role for Fernando Colunga, described in promotional materials as the only actor to have starred in five successive hit telenovelas. Maria la del Barrio also stars actress Iran Eory and Itati Cantoral, whose portrayal of the evil Soraya earned her the 1996 TVyNovelas magazine award for Best Villain.

In Maria la del Barrio, María Hernández (Thalia) is a poor and beautiful 15-year-old girl, forced to scavenge food to support herself and her elderly godmother. When her godmother dies, she goes to live with the wealthy Don Fernando de la Vega (Ricardo Blume). While she lives there she is resented by his new wife, Victoria (Eory), and her niece, Soraya (Cantoral).

María falls in love with the handsome but drunken son of the house, Luis Fernando (Colunga), arousing the jealousy of Soraya. He falls in love with her as well and asks her to marry him. Their happiness is cut short when a misunderstanding separates them. In her grief María gives up their child for adoption. although Luis Fernando returns and they adopt a child together she maintains hope of one day finding the son she gave up for adoption.