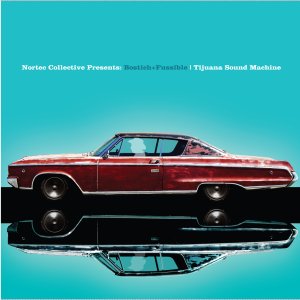 Tijuana’s electronica band Nortec Collective released a new album, Nortec Collective Presents Bostich + Fussible Tijuana Sound Machine (Nacional Records), in early May 2008. According to promotional materials, these musicians created and perform Nortec, a style of music they invented, as a fusion of Norteño (Spanish for from the North) and techno; to document the collision between the style and culture of electronica and traditional Mexican music. Scroll down to listen to the first single off the new album the title track, Tijuana Sound Machine.

“With Tijuana Sessions, Vol. 3, we focused on fusing vocoders, synthesizers and drum machines with the Norteño flavor,” said Pepe Mogt (Fussible). “This time around, we really relied more on the acoustic sound. We tried to achieve a better balance between the acoustics and the electronics. While some tracks on Tijuana Sound Machine aren’t even a month old yet, others have been around for a couple of years. We actually wrote many of these songs while on the road promoting Tijuana Sessions .”

“In every place we have toured to, whether it is Australia, Japan or the U.S., crowds respond differently,” said Fussible. “Even in Mexico, the response changes from town to town. But when it comes down to it, they are coming to our shows for the music, no matter whether they found it through a friend or online. So they are super enthusiastic either way. The real fun challenge comes when we play at festivals with audiences that are hearing our music for the first time.” 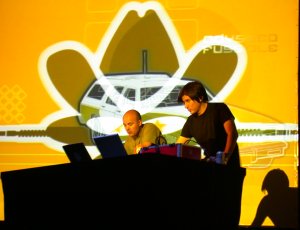 Tracks from Tijuana Sessions, Vol. 3 can also be heard in HBO’s “Big Love,” NBC’s “Friday Night Lights” and the movies “Fast Food Nation” and “Babel” as well as the video games, FIFA Soccer and FIFA Street 2. An interactive coffee table book, Paso del Nortec- This Is Tijuana dedicated to the Nortec phenomena, was published in the United States, Mexico and Europe.