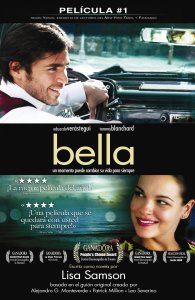 In May 2008, Lionsgate will release a 93-minute DVD version of the film Bella in the U.S. The same day the DVD is released, a 208-page novelized print version of the film, Bella: One moment can change your life forever, will become available for the first time. The DVD will sell for $27.98 and the price of the book is $14.99. Scroll down to watch a movie trailer of Bella in English.

The film is also scheduled to open in theaters in Mexico in May 2008. Bella un momento puede cambiar su vida para siempre, the Spanish version of the book, will be published by Grupo Nelson. The English edition of the book will be published by Grupo Nelson’s sister company, Thomas Nelson Fiction. Both books will be available as trade paperbacks. Grupo Nelson will launch the Spanish book version of Bella in the U.S. May 15 in Miami, Florida at the company’s annual booksellers’ conference. The book is expected to be in points of sale in Latin America after June 2008.

In Bella, a love story, life hasn’t turned out as rosy as Jose (Eduardo Verastegui), a cook, and Nina (Tammy Blanchard) a waitress, had planned. Inspired by a true story it is described as a film that “celebrates life, love, family and relationships.” The Bella screenplay was written by Alejandro G. Monteverde, Patrick Million and Leo Severino. The Bella novel was written by Lisa Samson, the author of 19 books, and is based on the original screenplay.

Produced by Metanoia Films, the motion movie was released in theathers October 2007. Bella won the c People’s Choice Award of the Toronto Film Festival, Best Picture and Best Actor at the 2008 Movie Guide Awards, and the Legacy Award from the Smithsonian Institute’s Latino Center.