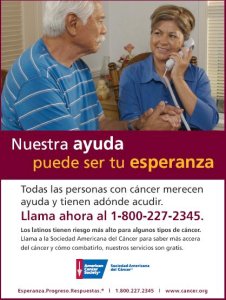 Print ad in Spanish – click on image to enlarge

Although cancer, a group of diseases with fast and abnormal cell growth, can affect anyone, the older a person the greater his or her chances of being stricken by this illness. According to the American Cancer Society, in 2003, 20 percent of all deaths among Hispanics were due to cancer. Looking at it another way, slightly less than half of all Hispanic men will have cancer in their lifetime, and slightly less than one third of Hispanic women will have cancer in their lifetime.

At the same time, some types of cancer affect Latinos more commonly than non Latinos. These include stomach, liver, cervix, leukemia and gallbladder. As America’s Latinos population continues to grow and age, these statistics become increasingly alarming.

To address this issue, the California Division of the American Cancer Society teamed up with two ethnic-media advertising agencies to create video and print ads targeting Chinese and Latino residents of that state with a message of hope and help. The resulting public service ads (PSAs) encourage Asian and Hispanic Americans to turn to the American Cancer Society for cancer-related information, education and services by calling the Society’s toll-free number or visiting its web pages. Scroll down to watch the new public service announcement videos in English and Spanish. 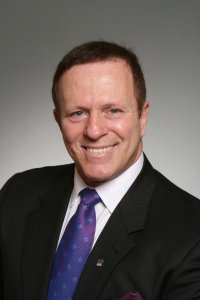 “Our goal with this campaign is to reach out to these communities and to let them know that we are here to help with in-language information and services that support California’s diverse communities,” said Carolyn Bruzdzinski, Ph.D., chief mission delivery officer of the California Division of the American Cancer Society.

The campaign is designed to educate the state’s Chinese and Latinos about cancer and free Society programs and services available in their communities. Promoters hope the newly launched public service announcements and print ads in Mandarin, Cantonese, English and Spanish will appear in ethnic media outlets throughout California beginning in late April 2008 through May 2008. Plans are in the works for the campaign to be expanded to the national level.

“As the premier source of information about cancer prevention and treatment, the Society provides important education, programs and services that address the unique needs of the many cultures and communities which reflect the people of California,” said David F. Veneziano, chief executive officer, California Division, Inc. of the American Cancer Society. “With over 56 percent of our population comprised of minorities, this campaign is an important part of our mission to eliminate cancer as a major health problem for all Californians.”

The advertisements were developed by two Los Angeles based agencies, Pochteca Media and TEN Communications with the American Cancer Society assisting in an advisory role. It took a team of six individuals two months to complete the Hispanic market ads. The Society plans to work with the agencies and several Asian and Spanish -language media organizations to place the PSAs. 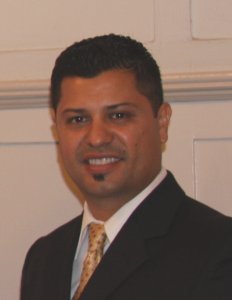 “It is our distinct honor to partner with the American Cancer Society for this extremely important cancer awareness campaign targeting the Hispanic community,” said Mario Cobián, chief executive officer, Pochteca Media. “Together, we hope to inspire the Hispanic community to take action for themselves and their families.”

“It is our great pleasure to work with American Cancer Society to help launch an in language media campaign in the Chinese market,” said Karen Park, president, TEN Communications. “This effort will not only generate awareness about the Society and its great services, but will also benefit medically underserved Chinese Americans in California. We hope more Chinese Americans will contact the Society for information and resources when dealing with cancer.”

There is also a Tell A Friend breast cancer program with a tailored component for Korean, Filipino, Vietnamese and Chinese women; Aconseje a su Amiga which encourages Latina women to get a mammogram and a Pap test; Look Good…Feel Better includes cosmetic offerings for women and is available in Spanish (Luzca Bien…Sientase Mejor); and Relevo por La Vida designed to place Relay For Life events in Hispanic communities.

The American Cancer society is a nationwide community-based voluntary health organization dedicated to eliminating cancer as a major health problem by preventing cancer, saving lives and diminishing suffering from cancer through research, education, advocacy and service. The California Division of the Society has local offices in 106 communities.

Click on the play button to watch the videos: