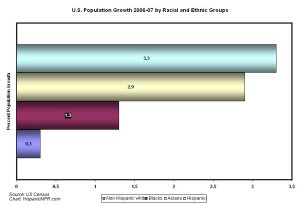 According to the latest Census Bureau updates, more than one third of Americans is from racial and ethnic minorities. Hispanics continue to grow faster than any other group, exceeding 15 percent of the overall population for the first time last year. At the same time, children of racial and ethnic minorities continue to exhibit significant growth. Hawaii was the only state where the share of non Hispanic white children rose.

High fertility and immigration are prompting the growth of Asian American and Hispanic populations. This is most evident in youth markets.  In two of the fastest growing states, Florida and Nevada, the majority of children are from ethnic minority groups. Among children five and younger, ethnic and racial minority children are already the majority across the country.