Watch video – Unauthorized David Beckham DVD to be released May 6 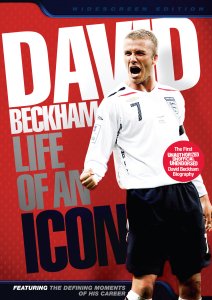 A new film, David Beckham: Life of an Icon, an unauthorized biography of the well known soccer player, is scheduled for release to the public on DVD May 6 for $19.97. Spotted by sports scouts in a working class neighborhood at the age of 11 he was signed up to play soccer at 14 by Sir Alex Ferguson and went on to become world famous.

The film shares insights on his life from his early days; his meteoric rise in sports and fame, including some moments of Beckham’s life with his famous wife, the birth of his son, and the family’s relocation to the United States. Scroll down to watch promotional videos in English and Spanish for the DVD.

“Soccer is the biggest sport in the Spanish-speaking world and Beckham is its biggest star,” said Matt Kennedy, director of marketing for Liberation Entertainment, the DVD’s distributor. “An estimated 50 percent of the Galaxy’s fans are Hispanic and have been there from day one. They love Beckham, which was evidenced by the fact that more than a quarter million jerseys were purchased before he even played his first Los Angeles game. To them, it’s not whether he came from Guadalajara or East London, it’s that he’s a great soccer player.”

The 77-minute film includes footage from his most important games, as well as family photos supplied by David’s father. The video also features some of Beckham’s greatest moments, commentary from players and journalists as well as pictures and footage. Distributors produced promotional materials in English and Spanish. In addition to the usual mass outreach to media in print, broadcast and online, they also approached Latino media representatives. 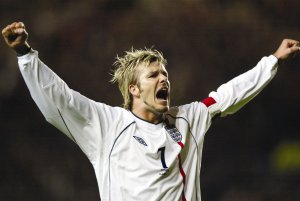 David Beckham’s first taste of the U.S. came with a distinctly Latin flavor. At 13 (in 1989), Beckham flew to Texas to compete in the Dallas Cup, a top youth tournament.

That home belonged to Sam and Christine Alcala. Beckham roomed with Mike, Sam and Christine’s son. Every morning Sam would drive them to practice after breakfast. In the evenings, they ate rice, beans and tacos.

The DVD is divided into the following chapters: Life of an Icon; Style and Fashion; World Cup 1998; The Comeback Kid; World Cup 2002 – Revenge; Worldwide Appeal Brand Beckham; Fallout With Alex Ferguson; Move to Madrid; World Cup 2006; Return to Madrid; and Move Towards Hollywood and Future.

Beckham grew from a modest life as a young boy in his early soccer days to a media star and style icon into a jet-set life. He recently moved with his rock star wife Posh Spice to Hollywood, California.

Click here to buy David Beckham: Life Of An Icon