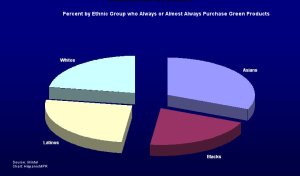 With everyone talking about green issues these days where does the growing Latino population fit in? Although there is insufficient in depth information to know for sure, it appears some Latinos share the concerns of the overall population about global warming and the environment. According to a couple of recent surveys, some concerned Latinos are willing to put their money where their mouth is and others may not be willing to do anything about it.

The market seems divided. While English dominant Latino youth with a strong online presence appear to mimic the pro green attitudes of youth across the country; Spanish dominant Hispanic families and older Latinos with a weak online presence may be more concerned with making ends meet and providing for their loved ones than with what may appear to be lofty goals they are unwilling or unable to support.

The dichotomy may be illustrated by two 2007 polls, the Green Living Report, a national online poll by Mintel, and Just the Facts: Latino Attitudes and the Environment, a state poll by the Public Policy Institute of California. While Latino respondents to the national online poll expressed willingness to support green initiatives; Latino respondents to the California phone poll demonstrated the most concern among their peers about air pollution but they were also the least supportive of measures to address the situation.

“Like most Americans, Hispanics are becoming more interested in ‘green’ living. Our research found that Hispanics are especially concerned about pollution and are more willing than non-Hispanics to pay extra for environmentally-friendly products,” said Colleen Ryan, who wrote the Mintel Green Living Report. “When you look at tech-savvy, English-speaking Hispanics, this is especially true. Hispanics in this category tend to be ‘greener’ in both attitudes and behavior than non-Hispanics.”

Although Mintel selected its sample hoping to be demographically representative of the overall U.S. population, individuals who are not online were excluded from the survey, introducing a bias, especially among some racial and ethnic groups. Because the survey was conducted in English, it is not reflective of English-speaking Hispanics without Internet access. The views of Spanish dominant or Spanish preferred Latinos may differ.

At the same time, the Public Policy Institute of California statewide phone survey conducted in July 2007 among 2,500 adult residents of California and published in November 2007 revealed Latino respondents in that state are the most concerned about air pollution but the least willing to support measures to regulate and remedy the situation. The survey was conducted in several languages including Spanish. Almost half of Latinos respondents (45 percent) think regional air pollution is a big problem followed by blacks (36 percent), whites (29 percent), and Asians (24 percent).

Among survey respondents Latinos 72 percent said the effects of global warming are already happening compared to 66 percent of blacks, 65 percent of whites and 59 percent of Asians. Latinos and blacks were the least likely to support heightened fuel efficiency standards for auto manufacturers.

Mintel, founded in the United Kingdom 35 years ago, is a supplier of consumer, media and market research. The company, with offices in Chicago, London, Belfast, Sydney and Shanghai, has been studying the United States Hispanic market since 2003.

The Public Policy Institute of California is dedicated to “Informing and improving public policy through independent, objective, non partisan research.” The authors of Just the Facts: Latino Attitudes and the Environment are Mark Baldassare, Dean Bonner, Jennifer Paluch, Sonja Petek.