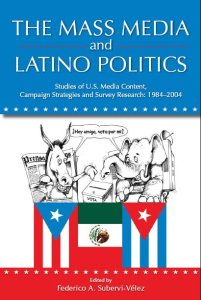 Texas professor Federico Subervi-Velez, Ph.D. and 22 colleagues, many of them academics, examine mass media and Latino politics in the United States over a 20 year period in the recently published The Mass Media and Latino Politics Studies of U.S. Media Content, Campaign Strategies and Survey Research: 1984-2004 (Routledge, $49.95). The authors recommend the book for scholars and researchers in communication, political science, and Latino studies, and for advanced courses on politics, media, and minority populations in the United States.

The 415-page soft cover book edited by Subervi-Velez is divided into three parts: Part one, Foundations, has two chapters What is Known? Writings on Contributions of Newspapers and other Mass Media to Latino Political Life; and Theoretical, Contextual, and Methodological Considerations. Part two, Studies of Media Coverage of Elections, is subdivided into two parts, The Spanish-Language Media and The English-Language Media.

The Spanish language discussion includes four chapters: Spanish-Language Daily Newspapers and Presidential Elections; Univisión and Telemundo on the Campaign Trail: 1988; Watching the 2000 Presidential Campaign on Univisión and Telemundo; and Hablando Política: What Spanish-Language Television News Told us About the 2004 Elections. The English language media is discussed in: Latino Politics in General Market English-Language Daily Newspapers: 1988 – 2004; Coverage of Latino Political Issues in Forty General Market Daily Newspapers Nationwide: 1989; Television News, Character Issues and Latino Images in U.S. National Elections of 1988, 1992 and 1996; and La Mala Educación of Network Media and National Politics: A Content Analysis of the Education Issue in the 2000 Presidential Election.

The final section of the book, Campaign Strategies, Political Advertisements, Surveys, is discussed in chapters 12 to 16: Democratic and Republican Mass Communication Campaign Strategies: Historical Overview;  Pluralism Examined: Party Television Expenditures Focused on the Latino Vote in Presidential Elections; Talk About Issues: Policy Considerations in Campaign 2004 Latino-Oriented Presidential Spots; Latinos’ Use of Media and the Media’s Influence on Political Knowledge and Participation: Findings From the 1989 Latino National Political Survey; and Latino Agenda-Setting Effect on the 2004 Presidential Election. The book closes with Summary and Conclusion: Recommendations for New Directions for Latino Political Communication Research.

The authors believe that studying the mass media can enhance the understanding of Latino politics in the United States. The contributors study theoretical foundations in an effort to establish what is known and how study of the media may promote an understanding of Latino politics. They assess how Spanish-language media have covered elections, and how English-language media have covered Latino-related issues and candidates in past elections. Some examine campaign strategies, political advertisements, and surveys to determine how the main political parties have relied on the media to promote Latino votes; and others discuss whether there is evidence that exposure to the media influences Latino politics.

The book concludes with a discussion of the steps the authors propose for the next generation of political communication research related to Latinos, and a possible agenda with theoretical and methodological guidelines relating to content analyses, studies of campaign strategies and advertisements, and survey research.

Subervi-Vélez is a professor at the School of Journalism and Mass Communication at Texas State University-San Marcos. He is also directs the Latinos and Media Project (LaMP). Prior to his work in Texas he held academic positions at the University of California Santa Barbara and the University of Texas. He is a contributing co-author of the Hispanic Marketing & Public Relations book.

Click here to buy The Mass Media and Latino Politics