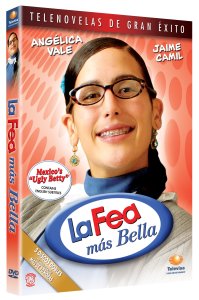 Xenon Pictures and Televisa Home Entertainment continue to partner in their efforts to reach the booming Latino market with DVDs. On their behalf Lionsgate Home Entertainment recently released the 2007 telenovela La Fea Más Bella, a triple-disc DVD package with more than 10 hours (700 minutes) of PG content in Spanish with English subtitles for $24.98.

According to promotional materials, the Spanish language soap was among the highest rates programs in its category in Mexico. It was winner of the 2007 TV y Novelas award for Novela of the Year provided Univision the highest ratings it’s ever achieved, drawing an average audience of 7.4 million viewers for the finale, according to Nielsen; and comparable to that of Ugly Betty, the English language U.S. counterpart on ABC.

She finally accepts a secretarial position at a major production company run by the founder’s dashing but womanizing son, Fernando. Lety falls in love with him and rescues the company from disaster while dealing with office gossips and Fernando.

The program was based on the Colombian hit Yo soy Betty la fea. La Fea Más Bella was written by Fernando Gaitan, who also penned the novelas Destilando amor and Café con aroma de mujer, and produces Ugly Betty. It was directed by actor Sergio Jimenez (Vivo por Elena, Nunca te olvidare) before his passing in 2007.