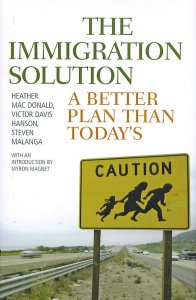 In a book published in 2007, three authors, two senior fellows from the Manhattan Institute and a senior fellow from the Hoover Institution, share their perspectives on the issues affecting immigration today. Heather Mac Donald, Victor Davis Hanson, and Steven Malanga propose an alternative immigration policy that welcomes skilled and educated people to the United States on the basis of how they can benefit the country in the 197-page hardcover book The Immigration Solution A Better Plan Than Today’s (Ivan R. Dee, $24.95).

Mac Donald believes there is an epidemic of crime, gangs, and illegitimacy that is resulting in a new Hispanic underclass; and that the Mexican government aids and abets illegal immigration to the United States and thwarts state and local attempts to resist it. Malanga, who argues that Hispanic immigrants produce a net cost to the American economy rather than a net benefit, proposes an immigration policy he believes would be liberal and in America’s interest. Davis Hanson writes about his own experience growing up in California’s farm country and watching the Hispanic immigrant influx transform his state for the worse.

Mac Donald authored five of the book’s nine chapters titled as follows: Seeing Today’s Immigrants Straight, The Illegal Alien Crime Wave, The Immigrant Gang Plague, and Hispanic Family Values? Davis Hanson and Steven Malanga each authored two of The Immigration Solution’s chapters: Do We Want Mexifornia? and Mexifornia Five Years Later; and How Unskilled Immigrants Hurt Our Economy and The Right Immigration Policy respectively. Earlier versions of the chapters were published between 2002 and 2006 in City Journal, a quarterly publication of the Manhattan Institute.

The Manhattan Institute for Policy Research is a conservative market think tank established in New York City in 1978. According to their website, the organization’s mission is to “develop and disseminate new ideas that foster greater economic choice and individual responsibility.” The Hoover Institution is a think tank based at Stanford University and dedicated to research in domestic policy and international affairs.