How much will Latino Democratic voters influence elections? 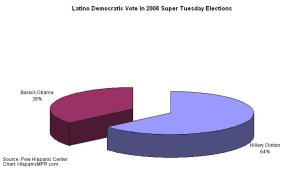 A report based on an analysis of Super Tuesday exit polling data in 16 states about Hispanics from Edison Media Research and Mitofsky International, the firm that conducts exit poll surveys for the National Election Pool, a national consortium of media organizations, indicates Latinos voters could play a deciding role in the selection of a primary Democratic candidate.

Could Latino voters tip the balance in the electoral competition between Hillary Clinton and Barack Obama? Young Latinos seem to be as enthusiastic about Obama as other young people. A string of straight victories for Obama makes the findings of the report ever more important since Clinton’s presidential hopes will rely heavily on the results of the Texas primaries and about one third of Texans are Hispanic.

According to the authors of the report, Latinos have already influenced this year’s primaries and caucuses. At the same time Latinos’ share of the Democratic primary vote increased in 12 of the 15 states for which researchers had exit poll data. In the Super Tuesday primaries February 5, 2008 Latinos voted for Clinton (63 percent) almost twice as often as they did for Obama (35 percent). 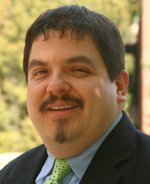 The report, published by the Pew Hispanic Center and written by Susan Minushkin, deputy director, and Mark Hugo Lopez, associate director, looks at the turnout, demographic characteristics, opinions and voting patterns of Latino voters in relation to the Democratic primaries and caucuses of 2008. Researchers also compared the voting patterns of mainstream, Latino and black voters as well as Latino turnout in 2008 and in 2004.

Prior to working at Pew, Minushkin worked at the Centro de Investigaciones y Docencia Economicas (CIDE) in Mexico City, where she was a professor of international studies and director of an ongoing public and elite survey in Mexico on foreign policy and Mexican attitudes toward international issues. Prior to joining the Pew Hispanic Center, Lopez was research director of the Center for Information and Research on Civic Learning and Engagement (CIRCLE) as well as a research assistant professor at the School of Public Policy at the University of Maryland.