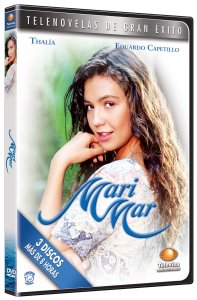 Xenon Pictures, Televisa Home Entertainment and Lionsgate Home Entertainment released “Marimar,” a 14-year old Spanish language telenovela, on DVD.  “Marimar” is the second installation of the “Maria Trilogy.” In it, Mexican actress Thalia played dual roles as Marimar and Bella Perez. The three-disc DVD set with 10 hours of content, in Spanish with English subtitles, is available at major retail stores for $24.98.

Other actors in the program are Eduardo Capetillo (“Baila Conmigo,” “Alcanzar Una Estrella“) and Chantal Andere (“Destilando Amor,” “Amor Real“). There is an appearance by actor Fernando Colunga (“Alborada,” “Abrazame Muy Fuerte“). The telenovela is also the last one actor Tito Guizar, who played Marimar’s grandfather, appeared in before his passing.

Click here for information on  Beyond the 30 Second Spot

The telenovela, a Spanish language type of soap opera, originally aired on primetime in 1994. “Marimar” was filmed mainly in Ixtapa, Zihuatanejo in Mexico. It was written by Ines Rodena and directed by Beatriz Sheridan. After its release, the soap aired in the United States, Mexico, and Philippines.

The telenovela producers believe one of the reasons for Marimar’s popularity was that it explored family, relationships, love, passion and socio-economic class issues. “Marimar” is the story of a beautiful young, but poor, girl who lives by the sea with her elderly grandparents. She falls in love with Sergio, the spoiled son of the wealthy Santibanez family. Sergio’s parents are withholding half of his inheritance until he is married.

He decides to use Marimar to placate and shame them. By choosing Marimar he will receive his entire inheritance and humiliate his parents by making “the dirty girl from the beach” their daughter-in-law. Because of the abuse Marimar receives at the hands of her in-laws she runs away to the city, hoping to escape the pain of her sham marriage. In the meantime, her birth father, an extremely wealthy man, is searching for his long lost daughter.