Immigrants to fuel demographic growth, Latino population to triple by 2050 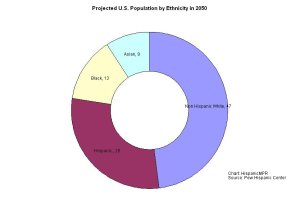 U. S. population in 2050 by ethnicity – click on image to enlarge

There should be 438 million souls in America by 2050 and Hispanics may account for 29 percent of the population. According to a recent Pew Hispanic Center report, 82 percent of the growth in the United States from now until 2050 will be the result of immigrant populations and their progeny. While white non Hispanic segments will grow 4 percent, Latino and Asian groups will triple.

By 2050, non Hispanic whites will represent 47 percent of the population, blacks 13 percent and Asian Americans 9 percent. At the same time, one in five American’s may be foreign born compared to one of eight in 2005.

The Pew Hispanic Center estimates are slightly higher than the U.S. government’s. The Census Bureau estimates there will be 420 people in the U.S. by 2050. Pew researchers believe immigration will result in 117 million new residents to our country, 67 million from immigrants and 50 million from the American born children and grandchildren of immigrants.

The report was authored by Jeffrey S. Passel, a senior research associate, and D’Vera Cohn, a senior writer, at the Pew Hispanic Center. Prior to working at Pew he was principal research associate at the Urban Institute’s Labor, Human Services and Population Center. Before joining Pew, she was a reporter for 21 years at The Washington Post, where she wrote about race, immigration, and other topics from 1991 to 2006.

One Response to Immigrants to fuel demographic growth, Latino population to triple by 2050