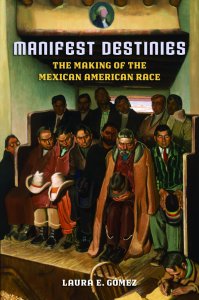 Manifest Destinies The Making of the Mexican American Race cover

New Mexico lawyer and author Laura E. Gomez examines the history of Mexican Americans in that part of the country in her new book Manifest Destinies The Making of the Mexican American Race (New York University Press, $35). In the book, she outlines the westward expansion of the United States 150 years ago and the permanent annexation of land from what was then northern Mexico. The acquisition of new land nearly tripled the United States territory and added 115,000 Mexican American citizens to our country.

What few people today talk about is that, according to Gomez, most of the former Mexican citizens joined American society involuntarily, not as immigrants, but as people conquered in war. She examines, in the 243 pages of the book, the origins of Mexican Americans as a racial group in the United States, and the irregular meanings of race and law in the nineteenth century.

Gómez focuses on the area that is now New Mexico to explore “the central paradox of Mexican American racial status as entailing the law’s designation of Mexican Americans as ‘white’ and their simultaneous social position as non-white” in society. She describes
the strong emotions that pushed and pulled the people of that time: the Mexicans, Indians, and Euro-Americans, the region’s three main populations who defined and dealt with racial and social relations.

Gómez, who was born in Roswell in 1964 and grew up in Albuquerque where she attended public schools in the North Valley, is a graduate of Harvard and Stanford universities. At Stanford, she completed a law degree and doctorate in sociology in six years. She went on to become a tenured professor at University of California, Los Angeles, where she taught for 12 years. In 2005, Gómez returned to New Mexico to join the University of New Mexico faculty as professor of Law and American Studies.

Click here to buy Manifest Destinies: The Making of the Mexican American Race