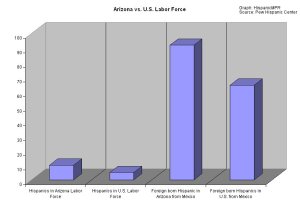 Arizona is in the immigration legislation limelight. Beginning last month, it was the first state in the country to pass legislation, the Legal Arizona Workers Act, to punish businesses who knowingly hire illegal immigrants. Although the Act only applies to new hires, some consider the new law aggressive, especially in light of the state’s high percentage of Latinos of Mexican origin, 89 percent. Others worry the new law will result in ethnic and racial discrimination and be difficult to enforce fairly.

“For me it’s very difficult. I feel as if these types of laws encourage racial profiling,” said Regina Romero, City Councilor of Tucson. “I don’t feel comfortable with these types of laws. Are we going to be targeted different? It’s very sad to hear what’s happening in our country. It’s very divisive. We will see after effects of this law.”

Under the new law, which threatens to punish employers who hire undocumented workers by pulling their business license; employers refer to a website to check a worker’s immigration status. Employers who violate the law will receive warnings before any action is taken. To date no companies have been fined.

Some Arizona residents, including elected officials and business sector representatives, say they will enforce the law because it is law although they disagree with it in principal. Critics are upset with the new system including the appeal procedures for workers who fail the verify process. Others plan to challenge the legislation in court.

In 2006, at the national level, 14.8 percent of the population was Hispanic and in Arizona 29 percent of the population was Hispanic. At the same time, 92 percent of foreign born Hispanics in Arizona were from Mexico compared with only 64.7 percent for the nation as a whole. Taking into account that nearly one third of the state population is Hispanic; and with so many of the state’s Hispanics forming part of the labor force, it’s easy to see how there could be a chilling effect for undocumented immigrants and the employers tempted to hire them.

No one knows how many laborers have lost work as a result of the law or what, if any impact, the legislation will have on the state’s economy. There are rumors that Arizona is loosing some of its residents but no one seems to know for sure. There are concerns that E-Verify, the federal database employers are supposed to refer to when verifying the status of a prospective worker, is inaccurate. Only a fraction of the state’s 150,000 businesses have signed up on the system.