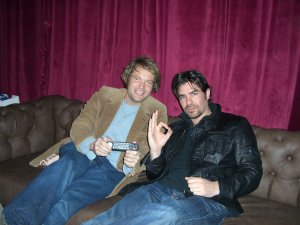 Virgin America launched service on August 8, 2007, and already has had 100,000 passengers. It has agreements with Disney, Fox, Paramount Pictures, NBC Universal Studios, Venevision International, Sony Pictures Entertainment, Terry Steiner International and Warner Brothers to provide major theatrical content at every seat and all its flights through its interactive in flight entertainment system. In addition to English language choices, the company boasts of film, television and audio programming in Cantonese, Mandarin, Japanese, Korean and Spanish.

“As the only California-based airline, we want to our entertainment line-up to be as diverse, sophisticated and smart as our guests,” said Charles Ogilvie, director of Inflight Entertainment & Partnerships, Virgin America. “Finding compelling Spanish-language content is a priority and we’ll continue to search out cutting-edge projects at Sundance and beyond. We’re thrilled that award-winning films like ‘Bella’ with acclaimed actor Eduardo Verastegui can be seen in their native language on Virgin America.”

“Bella” will premier on Virgin America in April 2008. The film recently won the People’s Choice Award at the Toronto Film Festival and the filmmakers were honored with the Smithsonian Latino Center’s prestigious Legacy Award.

“On long-haul flights we find that more than 90 percent of our passengers engage with Red, our in-flight entertainment system. A large percentage of those guests may do something either on-demand (movie, video, music video, or short film) or might listen to or watch a linear channel. In both areas we have multilingual content,” said Abby Lunardini, director of Corporate Communications, Virgin America.

Red offers passengers 25 on-demand films, live TV, audio music entertainment including the ability to compile individual play lists, videogames and meals on-demand. Virgin America is a San Francisco based low-fare carrier. Executives for the airline hope to serve 10 cities within a year of operation, and up to 30 cities within five years.