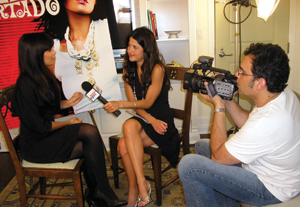 “LatinEyes,” a 30-minute English language lifestyle and travel program that began airing nationally two years ago, is targeting acculturated Latinos within the United States and beyond its borders. Promoters are relying on a multiplatform approach to capture the show’s many feminine viewers wherever they may be. Scroll down to watch a short video about “LatinEyes.”

Every week, 26 million viewers, 65 percent women and 10 percent non Hispanic, watch the program on television. About 40 percent of the show’s television adult audience is 18 to 49 years old and 52 percent is between 25 and 54.

The year round program, winner of a 2006 Northern California Emmy, can be seen on television and online. Soon it will become available on cell phones and aboard some international flights. Marketers for the show hope to leverage the program’s offline presence to drive its online and other platform distribution.

Online, some segments of the program are available on the “LatinEyes” website, reaching between 10,000 and 20,000 fans. “LatinEyes” joined Joost in October 2007 as part of the online video collection’s catalog allowing Joost subscribers in the United States to watch the program online at a time and date of their choice. Beginning February 2008, the show will be available on mobile devices on the LatinEyes mobile social network with a built in audience of 50,000 subscribers.

“On November 2007, I came across a study from the Center for Media Research that stated 80 percent of marketers plan to spend between 10-30 percent of their marketing dollars against new and/or emerging media formats in the next two years. ‘LatinEyes’ offers marketers with access to the fast growing Hispanic market via a unique platform that encompasses online, offline and in-flight entertainment. This is a unique opportunity for marqueters that want to test new media offerings,” said Ivan Cevallos, chief executive officer of Luminacion, the program’s exclusive marketing representative.

“LatinEyes,” owned by LatinEyes Media and Andres Pruna, has been on the air since 1999, when it began broadcasting in San Francisco as a sample show for AT&T’s local television affiliate. Now, the program is broadcast to 80 markets in the U.S. via local stations, America One and CoLours networks.

In spite of the program’s enviable growth, “LatinEyes” execs are not sitting on their laurels. In addition to the expanded viewing platforms, plans are in the works for a website revamp. The new portal is expected to feature an enhanced Web 2.0 experience with social and mobile interaction as well as sponsor driven contests.