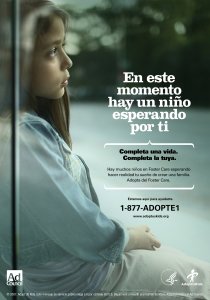 The tag for the campaign, created in partnership with the U.S. Department of Health and Human Services Administration for Children and Families with the Collaboration to AdoptUsKids, is Completa una vida. Completa la tuya. (“Complete a life. Complete your own.”). Scroll down to watch three new AdoptUsKids public service announcement videos.

“I am confident that this new campaign will remind the Hispanic community that there are every day rewards with adopting a child and providing them with a loving home,” said Peggy Conlon, president and chief executive officer of Ad Council.

The new adoption ads were distributed to more than 28,000 media outlets nationwide on Wednesday, December 12 through donated media space. The multi-media program includes Spanish-language television, radio, and print public service announcements (PSAs) issuing a national call-to-action in the messaging itself.

“Adoption messaging has been focused traditionally on creating an emotional connection to the children,” said Federico L. Mejer, chief strategy officer at Revolucion. “However, the adoption experience is extraordinarily powerful for the adoptive parents as well, and we felt that the most compelling approach to promoting adoptions among Latinos was to focus on the parents’ sense of fulfillment.”

“You can’t really draw a comparison between general market and Hispanic advertising and media. When we produce PSAs for the Hispanic community, we develop culturally relevant ads that are based on consumer insights with the target audience,” said Ellyn Fisher, director of Corporate Communications of Ad Council, when asked how Hispanic announcements are received compared to how general media announcements are received. “We also distribute the PSAs and conduct outreach specifically to the Hispanic media market, which is a much smaller universe than the general market media. Our Hispanic ads receive generous support from the Hispanic media.”

“Our focus was to try to identify those little moments in life that really matter,” said Alcazar. “It’s not graduation day or Christmas morning that these kids are longing for; it’s moments like the Sunday visit to the pizza place with Dad that gives life its meaning.”

Revolucion Hispanic Communications is a seven year old Hispanic-owned brand-communications agency based in New York City. The Ad Council is a private, non profit organization that relies on volunteer talent from the advertising and media industries to deliver social messages to Americans.

The Collaboration to AdoptUsKids is a multi-faceted, five-year, federally funded project to recruit families to adopt the children waiting in foster care for permanency. The Administration for Children and Families is responsible for a variety of activities that promote the economic and social well being of families, children, individuals and communities.