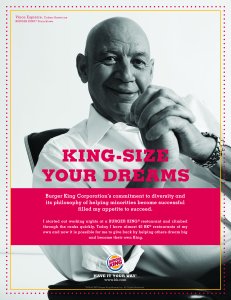 Republica, BKS’s designated agency for diversity issues, developed the marketing and communications initiative for Burger King Corporation. According to a BKC spokesperson Burger King representatives are “still finalizing our media plan but we will be putting ads in such publications as Poder and Hispanic Enterprise. Currently the ad campaign does not have an online component.”

The campaign consists of a series of real-life testimonials of Hispanic, African American and Asian franchisees and suppliers. One ad is a stylized black-and-white portrait that highlights a Cuban-American businessman who began as a Burger King restaurant employee and now owns almost 40 of the hamburger chain’s restaurants. Another ad showcases an African American businesswoman who is one of BKC’s largest suppliers.

“BKC is committed to showing its support for a diverse workforce and business partnerships,” said Cirabel Lardizabal Olson, director of inclusion and external affairs, BKC. “One of our biggest strengths is our respect for inclusion, which helps reflect the demographics of our market today and our customers’ reality.”

The Burger King system operates more than 11,200 restaurants in 50 states and 69 countries and U.S. territories worldwide. According to promotional materials, 90 percent of Burger King restaurants are owned and operated by independent franchisees. No information was available on the number of Hispanic owned franchises.