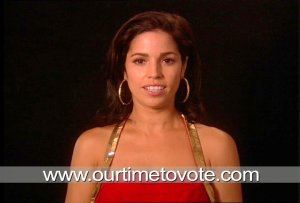 Comcast, the Hispanic Federation, League of United Latin American Citizens (LULAC) and the National Association of Latino Elected and Appointed Officials (NALEO) Educational Fund, launched “Our Time to Vote,” a year-long, non-partisan voter education and registration campaign designed to increase voting in Hispanic communities with cable access. Scroll down to watch a video of the Hispanic oriented public service announcement.

“Comcast recognizes that broader participation in the democratic process is important for our nation, and we are very pleased to launch this partnership to pursue that goal,” said David L. Cohen, executive vice president, Comcast. “This campaign reflects the cable industry’s commitment to strong local communities and to active public citizenship.” 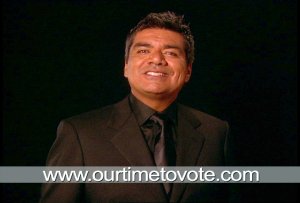 The PSA, recorded at this year’s NCLR Alma Awards, will air prior to the 2008 primary elections in Comcast, Time Warner, Cox Communications, Inc. and Bright House Networks markets. A series of “Get out the Vote” spots will run from September 1, 2008, through November 3, 2008, prior to the general election.

“Hispanic voter participation is critical to the election of the next President of the United States and other key leadership positions,” said Congressman Joe Baca, chairman of the Congressional Hispanic Caucus. “If our community is going to have a say, now and in the future, on the issues that matter most to us, we must show our empowerment at the polls. This type of unique partnership serves as a great example for other corporations to replicate.”

“Voting is one of our most sacred responsibilities, as we nurture and advance our democracy with every vote cast,” said Congresswoman Illeana Ros-Lehntinen. “Being able to vote and not participating in the process is tantamount to giving up your right on deciding what public official will govern our affairs. I applaud Comcast for their continued leadership in our community and throughout the nation.”

The Hispanic Federation is a membership organization of more than 94 Latino health and human service organizations that focuses efforts on voter education and registration programs during election cycles. The Comcast Foundation grant will assist the Hispanic Federation’s efforts to educate the public on the importance of voter participation through civic participation workshops, forums and other civic activities, expanded voter registration efforts and voter mobilization on Election Day.

The League of United Latin American Citizens (LULAC) is one of the largest and oldest Hispanic organizations in the United States that works to advance the economic condition, educational attainment, political influence, health and civil rights of Hispanic Americans through community-based programs operating at more than 700 councils nationwide. The Comcast Foundation grant will support the LULAC Democracy Initiative, whose goal is to increase participation rates by immigrant and Latino voters in the 2008 elections.

“‘Our Time to Vote’ is designed to bring a wide range of diverse Americans into the voting process,” said Susan Gonzales, corporate senior director of Federal and External Affairs and vice president of the Comcast Foundation. “As a company dedicated to diversity, we are pleased to make this contribution to broadened civic engagement in the African American, Asian American and Pacific Islander and Hispanic communities.”