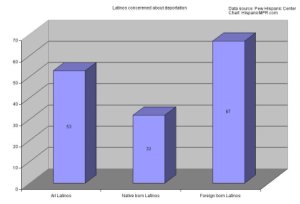 Although Congress has been unable to reach consensus on immigration reform, national and state authorities have introduced new enforcement measures including faster deportations, additional workplace raids, and restrictions on access to driver’s licenses and other government services. This increased attention on illegal immigration issues and heightened enforcement is causing many Hispanics unease, according to a Pew Hispanic Center 2007 National Survey of Latinos.

The Center conducted the survey by telephone from October 3 through November 9, 2007 among a random sample of 2,003 Hispanic adults the center considered nationally representative. Nine researchers contributed to the final report.

Based on the results of the survey, Pew researchers believe Hispanics, foreign born Latinos in particular, view illegal immigration in a positive light and consider it is beneficial for Latino communities and the country’s economy overall. More than 50 percent of Latinos surveyed in the United States worry that they or a loved one could be deported.

About half of Hispanic survey respondents believe they have suffered as a direct result of increased focus on immigration, and two thirds are convinced their life is more difficult due to the failure of Congress to enact legislation to address immigration reform.

Survey respondents said some of the negative effects on them of the public’s focus on illegal immigration include difficulty finding work or a place to live. They are also less likely to rely on government services or travel outside the country; and they believe there is a greater probability than in the past that they will be asked to produce documents to prove their immigration status.

Native born Latinos are less likely than foreign born Latinos to describe a negative personal impact due to increased focus on illegal immigration. Non citizen Hispanics feel “much more vulnerable” than Hispanics who are citizens. Latinos who are not citizens are twice as likely as Hispanic citizens to worry about deportation and to feel current policies have a direct impact on their lives.