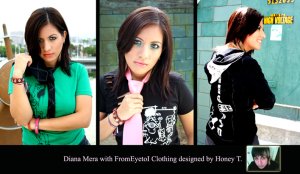 When she performs, singer Diana Mera wears From Eye to I shirts and hoodies designed by Honey Tavassoli, a 24 year old born in Iran and raised in Tustin, California known in the fashion industry as Honey T. The two artists established a promotional agreement through which Mera showcases her favorite Hotney T. clothing line items when she performs.

“Besides loving the designs, Honey is wonderful and has created pieces specifically for me when I had photo sessions, she is fabulously talented and like her name, very sweet,” said Mera.

Honey T designs T-shirts, jackets and tank tops with original drawings and paintings of her own inspiration. She then makes her paintings ready to print on the T-Shirts. Honey T original art is pressed in the fabrics that Mera wears, together with her iconic ties and chucks. Honey T clothes, made in the United States, cost between $13 to $40 and are available on the designer’s website.

“We had to look for something original within the simple image Diana has; I thought Honey T’s clothes were excellent because the printed designs in the shirts are unique, she personally draws them, it’s very interesting.” said Jorge Torres, Mera’s publicist.

Mera, a singer, composer and an actor, was born in Quito, Ecuador. She was raised in Lima, Peru and lived in México, Venezuela, and Switzerland prior to arriving in the U.S. were she now resides. She started her career in television shows such as “Despierta América” on Univisión and “De Mañanita” on Telemundo. Four of her music videos have appeared in VHUNO and MTV Español.  She has appeared on radio and television shows like “El Gordo y La Flaca,” “América en Vivo,” Univisión Radio, Caracol and Cadena Azul and on Cristina Saralegui’s show.