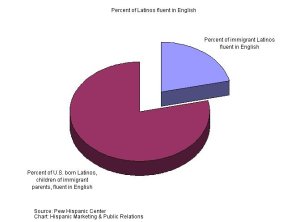 According to a series of six surveys conducted by the Pew Hispanic Center between 2002 and 2006 among 14,000 Latinos, most Hispanic adults born in the United States of immigrant parents say they speak English fluently. This is a sharp contrast to their foreign born parents; only a small minority of which consider that they are fluent in English.

Pew researchers, Shirin Hakimzadeh and D’Vera Cohn, analyzed the survey results and drafted a recent report concluding that less than 24 percent of foreign born Latinos consider they speak English very well while 88 percent of their U.S. born children consider themselves fluent in English.

The researchers also found respondents to the survey, of all generations, spoke English at work more frequently than at home. At the same time, more recent generations show a 94 percent of adults who consider they speak English. The figures for adults’ reading ability are similar to their speaking ability.

The report findings are based on four measures used by respondent to rate of their abilities, including their own English-speaking skills, their English-reading skills, their level of English use at home, and their level of English use at work.The researchers relied on the results of two of the surveys as well as a national survey conducted by the Pew Hispanic Center in October and November of 2007 which indicate Latinos believe inadequate English language skills are an obstacle to their acceptance in the United States. These findings are similar to those from previous surveys conducted by the Center.