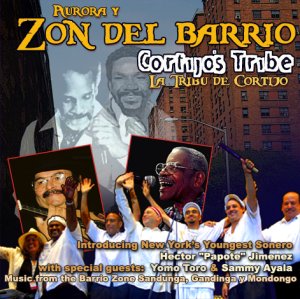 New York Latin band Zon del Barrio recently released its debut CD, “Cortijo’s Tribe” with the help of Emusica Records and Barrio Zone Productions. The Spanish Harlem group describes its style as structured on a solid foundation of Afro-Caribbean rhythms with a New York twist and a celebration of Afro-Antillian music.

Zon del Barrio is a play on words for the musical genre son of Latino communities. Produced by musical director David Fernandez, the CD blends dance rhythms of Cuba and Puerto Rico within a New York setting. According to promotional materials it includes elements of jazz, R&B, hip-hop, funk and reggaetón, raw street plenas and bombas. Cortijo’s Tribe follows the production style of salsa artists Al Santiago whose approach is said to have paved the way for the Fania music explosion of the 1970s.

Zon Del Barrio has shared the stage with Spanish Harlem Orchestra, Oscar D’Leon, Bobby Valentin, Michael Stuart, Larry Harlow, Jimmy Bosch, Andrea Brachfeld, La India, and Chembo Corniel. The band has appeared on Univision during the Latin Grammy Awards, on the morning show “Despierta America” on Telemundo, Fox 5, Manhattan Neighborhood Network and the Vic-Fezensac Salsa festival in Toulouse, France; the Howl Festival in the Lower East Side, the Orchard Beach Salsa Concert Series, the Half Marathon in Battery Park, The River to River Festival, and the Borgata Hotel & Casino in Atlantic City.