Listen to song and podcast interview with Playwright David Gonzalez, D.A. about his work and Latino audiences 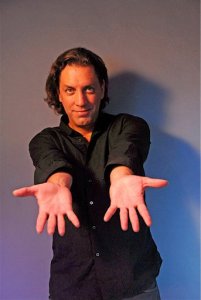 A podcast interview with Playwright David Gonzalez, D.A. is available in the Podcast Section of Hispanic Marketing & Public Relations, HispanicMPR.com. During the podcast, he discusses his work and reaching Latino audiences with Elena del Valle, host of the HispanicMPR.com podcast.

David is a storyteller, musician, poet, actor, therapist and educator. He was nominated for a 2006 Drama Desk Award for Unique Theatrical Experience for his production of “The Frog Bride” at Broadway’s New Victory Theater. He has created numerous productions including ¡Sofrito!

In 1998, he received the Helen Hayes Performing Artist of the Year Award. David also wrote “The Secret of the Ceiba Tree.” He recently completed Rise for Freedom!, a libretto commissioned by the Cincinnati Opera for the 2007 season. “Mariel,” an Afro-Cuban musical co-written with Grammy-nominated songwriter John Forster, is set at the turbulent times of the Mariel boat-lift from Cuba in 1981. The play, commissioned by the Cincinnati Playhouse in the Park, premiered in March 2007 and was winner of the Macy’s “New Play Prize for Young Audiences.”

David’s poetry has been featured on Bill Moyers’ documentary “Fooling with Words” on Public Broadcasting Service and National Public Radio’s “All Things Considered.” He was the host of “New York Kids” on WNYC for eight seasons and is a contributor to Studio 360 on National Public Radio. David received his doctorate in Music Therapy from New York University’s School of Education. In 2006, he climbed to the summit of Mount Kilimanjaro in Tanzania.

To listen to the interview, scroll down until you see “Podcast” on the right hand side, then select “HMPR David Gonzalez, D.A.” click on the play button or download it to your iPod or MP3 player to listen on the go, in your car or at home. You can also subscribe to the podcast by right clicking over the podcast box and selecting “copy shortcut” then inserting the URL address in the podcast section of your iTunes program listed under the “advanced” column. The podcast will remain listed in the November 2007 section of the podcast.

Click the button to hear the interview with David Gonzalez podcast:

Click the button to hear the song “Sofrito Radio Mix”