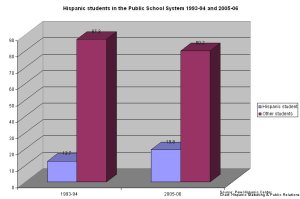 Interaction between diverse groups of ethnic students may influence students’ attitudes and perhaps future behavior. How desegregated are public schools today? A recent analysis of 93,845 public school enrollment data by the Pew Hispanic Center revealed some interesting findings. The Center examined ethnic make up in public schools between 1993-94 and 2005-06 and discovered that while non Hispanic white students were less isolated from minority students black and Hispanic students became a little more isolated from non Hispanic white students.

The apparently contradictory statement can be explained, according to Rick Fry, a senior research associate at the Pew Hispanic Center and the author of the analysis, by looking at the overall demographic trends affecting schools during those years and how they affected the system. The report concludes that in nearly every state non Hispanic white students became more exposed to minority students since 1993-94. At the same time, in many states minority students are less exposed to non Hispanic white students.

His review indicates an increase of Hispanics in the public school system greater than 55 percent. In 2005-06, Latin students represented almost one fifth (19.8 percent) of public school students compared to 12.7 percent twelve years earlier.

The researchers based their findings on data from the U.S. Department of Education Common Core of Data (CCD) Public School Universe Survey. The Pew Hispanic Center, an initiative of the Pew Research Center, is a non-partisan, non-advocacy research organization based in Washington, D.C. The Pew Hispanic Center is funded by The Pew Charitable Trusts.