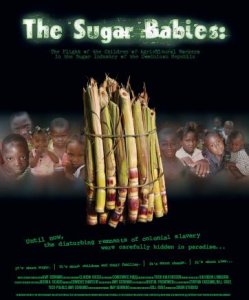 The Sugar Babies film poster (click on image to enlarge)

A recent 99 minute documentary, directed by Miami filmmaker Amy Serrano, outlines the plight of the children who work in the sugar cane fields and their families. “The Sugar Babies: The Plight of the Children of Agricultural Workers in the Sugar Industry of the Dominican Republic,” zooms in on the “disturbing remnants of colonial slavery” carefully hidden in paradise on the Caribbean island of Hispaniola. The documentary is in Spanish, Creole, French and English. Two versions are available, one with English subtitles; another with French subtitles.

According to promotional materials, the film explores the lives of the descendants of the first Africans brought to the island of Hispaniola to work in the sugar cane fields. Sugar was at one time a highly valuable commodity.  The poor and disenfranchised who remain on the island, now shared by Haiti and the Dominican Republic, the film makers argue, continue to be trafficked to work in the production of sugar under circumstances they describe as modern day slavery.

The documentary was recently featured in the Montreal International Haitian Film Festival.  The next showing will be in November 8, 2007 at the Denver, Colorado National Hispana Leadership Institute annual conference. 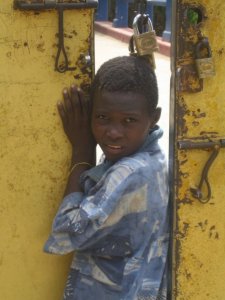 Child on border that separates Haiti from the Dominican Republic

“The Sugar Babies” examines the moral price of sugar from the perspective of the conditions surrounding the children of sugar cane cutters of Haitian ancestry in the Dominican Republic, and the denial of their basic human rights. 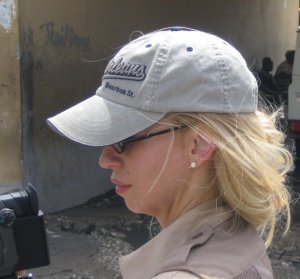 Narrated by author Edwidge Danticat, the film features original music by composer Bill Cruz including the songs “Branded” and “The Devil’s Work.” There is also music of Bola de Nieve, Alberto Beltran, Kenny Rankin, Solomon Burke, the Blind Boys of Alabama and original field recordings by The Sugar Babies.

“The Sugar Babies” was produced by Miami based Siren Studios  in association with The Hope, Courage and Justice Project ofNew Orleans and The Human RIghts Foundation of New York.  Others involved in the production were Jason A. Ocasio,  editor and art director; Salvador Longoria, production associate and legal counsel; Thor Halvorssen, associate producer;  Constance Haqq, co-producer; and Claudia Chiesi, executive producer.

Serrano wrote, shot, produced and directed the film. The Sugar Babies was made possible by The Crowley Children’s Fund, Tico Pujals, Cindy Nord, and The Fund for a Just Society.

One Response to Film focuses on bitter aspects of sugar industry