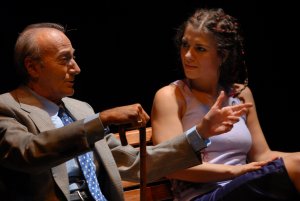 “As one of the leading Latino theaters in the nation, GALA is proud to be at the heart of DC’s dynamic and diverse cultural landscape,” said Hugo Medrano, founder and producing artistic director of the theater. “At GALA culture is never a barrier but always a bridge, uniting us across boundaries and awakening our identity, pride, and endless passion.”

GALA’s 2007-08 season features works by and about some of masters of the Spanish language, such as Jorge Luis Borges and Federico García Lorca. The season also embraces Latino authors and performers whose language is forging a new chapter in Latino culture. There are works by spoken word poets and hip-hop performance artists like Chicano-Cubano Paul Flores, Nuyorican La Bruja, and DC’s Quique Aviles, and a new play by Venezuelan Gustavo Ott. The theater will also hold its annual flamenco festival and showcase the work of Mexican composer-poet Agustin Lara.

Some of the performances this year, in Spanish with English subtitles, include “Cita a ciegas” (Blind Date) by Argentinean Mario Diament, directed by José Carrasquillo and starring Hugo Medrano from September 20- October 14, 2007; the U.S. premiere of “Tu ternura Molotov” (Your Molotov Kisses) by Venezuelan Gustavo Ott and directed by Abel López from January 31-February 24, 2008; “Bodas de sangre” (Blood Wedding) by Spaniard Federico García, directed by Hugo Medrano and with guest artist Mel Rocher, April 3-27, 2008; and the world premiere of “Boleros & Blues, The Legacy of Lara,” a musical by Abel López with pianist Mari Paz and mezzo-soprano Anamer Castrello, June 5–29, 2008.

Over the past 15 years GALA and the Washington Performing Arts Society partnered to commission over 20 new works of theater, music, dance and spoken word and presented hundreds of established and emerging artists such as Tito Puente, Guillermo Gómez Peña, and Gilberto Gil.

GALA is a nonprofit, tax-exempt organization supported in part by the DC Commission on the Arts and Humanities, the National Endowment for the Arts, the DC Mayor’s Office on Latino Affairs, private foundations, corporations and individuals. GALA is a member of the League of Washington Theaters, the Cultural Alliance of Greater Washington, the Theatre Communication Group, the National Association of Latino Arts and Culture, the National Performance Network, the Association of Performing Arts Presenters, and the Latino Federation of Greater Washington.