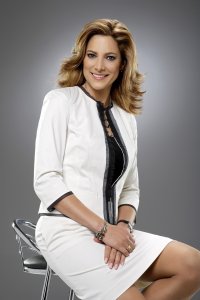 Salazar has worked in journalism for 22 years and received several Emmy awards. She worked as a news anchor, as a war correspondent for El Salvador’s 12-year civil conflict, and as a White House correspondent. Prior to joining SBS, she worked with CNN en Español, Telemundo and Univision and hosted her own debate show, “María Elvira Confronta.”

Salazar has interviewed political and public figures, including Presidents Bill Clinton and George Bush. In 1996, she was the first Spanish-language U.S-based television reporter to obtain a one-on-one interview with Cuban leader Fidel Castro. In 2003, she interviewed Chilean President Augusto Pinochet.

A Cuban-American, Salazar was raised between Puerto Rico and Miami. She holds a Masters Degree in Public Administration from the Harvard University’s John F. Kennedy School of Government. She began her broadcast career in 1983 as a reporter for Channel 23 in Miami.