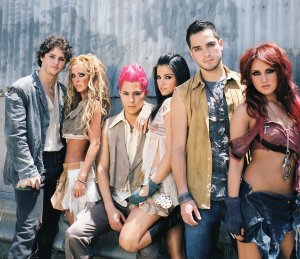 On September 20, RBD was scheduled to perform its single “Besame Sin Miedo” and a surprise track during a special appearance on “Mi TRL.” On October 9, they will appear in “Tour-ismo,” sharing with fans an intimate side of RBD as the group members explore New Mexico, shop for vintage clothing, meet with Native Americans who explain the city’s celestial spirit, and ride low-riders before performing in concert.

“We are thrilled to bring MTV Tr3s viewers these unique connections to RBD,” said Michael Galbe, vice president, Music and Talent, MTV Tr3s. “Our sponsorship of RBD’s ‘Tour Celestial 2007’ connects MTV Tr3s viewers with one of the biggest selling Latin acts of the past several years and gives our viewers unique and exclusive access to RBD from exciting new programming to texting to live mega events.”

RBD is Anahi, Dulce, Maite, Alfonso, Christian and Christopher. The group was born in 2004 from Mexican soap opera “Rebelde.” According to promotional materials, before arriving in the U.S., “Tour Celestial 2007” sold out venues in Brazil, Ecuador, Spain, Romania and Japan.

MTV Tr3s is a television network dedicated to bicultural Latino youth with a fusion of American and Latino music, cultures, lifestyles and languages. Music programming is at the core of MTV Tr3s and the channel features popular performers, emerging artists and new sounds. In addition to music programming, MTV Tr3s also features lifestyle series, news, and documentaries.

Roptus is an international marketing and concert production company that specializes in live entertainment marketing events for the Latin market. Roptus operates in 14 countries. Properties include the RBD 2006 and 2007 world tours, and active divisions in soccer and theater events in Los Angeles and Hollywood, California.