Wages of foreign born Latinos increased in past decade 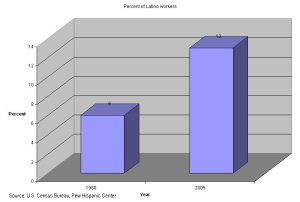 The number of Latino foreign workers and their earning ability increased over the last ten years. While foreign born workers represented 7 percent of the labor pool in 1980, by 2005, they represented 15 percent of workers. Latinos accounted for 13 percent of the total labor force in 2005, up from 6 percent in 1980.

At the same time, there were 1.2 million more Latino workers in 2005 than in 1995.  Not only did the percent of Latinos in the labor force increase and the absolute number of Hispanic workers shoot up, their earning capacity improved.

According to a recently published report by the Pew Hispanic Center, foreign born Latinos earned more money per hour in 2005 than they did ten years earlier. Newly arrived Hispanics between those years also fared better, according to Rakesh Kochhar, associate director for Research, Pew Hispanic Center.

Kochhar concluded this is due to the arrival of better educated Latinos more likely to become employed in construction than in agriculture. At the same time that wage earning capacity of Latinos escalated to the middle of the range from the low end, wages for Asians jumped to the high end.The Pew report was based on the Census Bureau Current Population Survey, a monthly survey of 60,000 families. The report did not distinguish between documented and undocumented immigrants or the earning capacity of each group.