Is Mexican immigration growth slowing down? 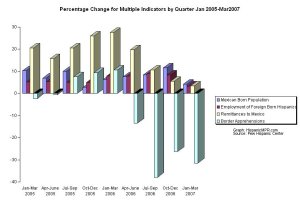 Although the Mexican born population in the United States has increased over the last three years and continues to increase, the rate of growth seems to have slowed in the last few months. According to a May 2007 report by the Pew Hispanic Center, it is difficult to determine exact changes in immigration from Mexico to the United States. It appears the percentage growth of south to north migration has been decreasing since mid 2006.

They concluded that the rate of growth of immigration from Mexico to the United States may have slowed in the second half of 2006 and first half of 2007. Due to inexact data sources, the researchers are unable to identify the reasons behind the possible changes or predict future trends. At the same time, they can’t tell if the slower immigration growth is the result of political, economic and border control policies or other factors.

In mid 2000 there were 4 million Mexican born residents in the United States. By early 2007 that number had reached 7 million. While many focus on the large number of Mexican immigrants entering the country, close inspection reveals a gentler slope in the growth over the last months.

One Response to Is Mexican immigration growth slowing down?