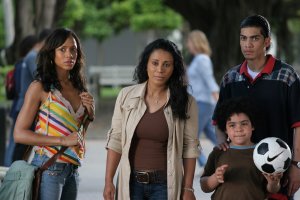 The DeLeon family in “Illegal Tender”

New Deal Productions will release a new film, shot in New York and Puerto Rico in only 28 days, about a young Latino man and his mother who flee from their home when the gang thugs who killed his father come looking for him, August 24, 2007. Cast members include Rick Gonzalez, Wanda De Jesus, Dania Ramirez, Tego Calderon, Manny Perez, and Gary Perez. The action drama was written by Franc Reyes (“Empire”) and produced by Reyes and John Singleton (“Four Brothers,” “Hustle & Flow”).

Wilson De Leon, Jr. (Rick Gonzalez) a university student, and his mother Millie DeLeon (Wanda De Jesus) must face ghosts from the past, the men who killed the family patriarch. The R rated movie is two and a half hours long.

“I respect Franc. as a filmmaker,” said Singleton, who after seeing “Empire,” thought the two might one day collaborate. “I asked him what he was working on, and he told me about this story he had in his head.  I loved the idea because it was about a mother and son, and I’m always trying to explore human connections in my films.”

Millie, described as a modern day heroine, is an educated upper-class widow, raising her college honors and elementary school student sons alone. She has made a comfortable new life by investing the fortune made by her husband, a drug dealer, 20 years earlier.

After a past acquaintance spots Millie she decides to relocate her family to avoid the killers coming after her family. This time, Wilson, her oldest son, decides to stay against his mother’s wishes. He survives an attack by the assassins determined to protect his family at all costs.

“Illegal Tender” includes music from Latin Hip Hop artist Tego Calderón. A native of Puerto Rico, Calderón gained recognition in the Latin music world in 2002 with the underground release of a remix collection entitled “El Abayarde.” In his music, he mixes rhythmic styles from the Caribbean, Latin and American hip-hop with salsa, dance hall, bomba, rumba and blues.