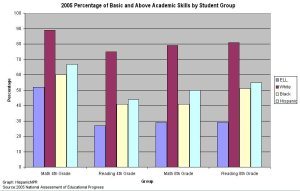 Although there doesn’t seem to be an exact number, an administrative count with little demographic information indicates in the 2003-04 school year there were 3.8 million ELL students. A more recent report, the 2005 American Community Survey, estimated that 9.4 million Hispanic students attended public school and 2.7 million public school students spoke English less than very well. Seventy percent of the limited English students were Hispanic; one in five Hispanic students spoke a language other than English at home and spoke English less than very well.

The report also identifies significant gaps between the scores of ELL students and their black and Hispanic counterparts. An analysis of demographic data also explains why there is a decline in achievement among English Language Learners from elementary to middle school.