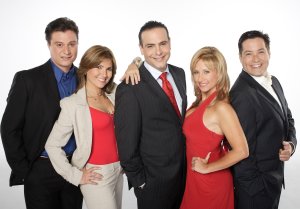 Miami, FL – Miami station Mega TV’s “Paparazzi” show was so successful at the local level that it’s going national. Starting July 2, 2007, the SBS produced program began airing in other markets. “Paparazzi” will be syndicated across various television stations owned by Pappas Telecasting Companies, one of the largest privately-held commercial television broadcast groups in the United States.

Under the agreement, “Paparazzi” eventually will be televised on more than 20 Pappas television stations in California, Texas, Wisconsin, Iowa, Nebraska, Arizona, and Nevada, as Pappas Telecasting implements its new Spanish-language programming initiative. In California, Iowa, Nebraska, and Nevada, the show will available on KTNC-TV and KTNC-DT, which cover the San Francisco-Oakland-San Jose and Sacramento-Stockton-Modesto areas; KAZR-CA, in Reno, Nevada; KAZO, Omaha, Nebraska and KAZJ, Sioux City, Iowa will broadcast the program. Over the next six months, KFRE-CA in Fresno, KEAZ-LP in Eureka, and KBBV-CA in Bakersfield will be added.

In Texas, “Paparazzi” initially will appear on KAZH-TV and KAZH-DT in Houston, Texas. KXLK-CA in Austin, and KXCC-CA in Corpus Christi, Texas, WWAZ-TV and WWAZ-DT in Milwaukee, Wisconsin, will be added later in 2007. South of the border, viewers in Mexico also will be able to watch “Paparazzi” in a few months on KDBC-DT.3 in El Paso, Texas, which covers Juarez, Mexico, and KSWT-DT.3 from Yuma, Arizona, which reaches Mexicali, Mexico.