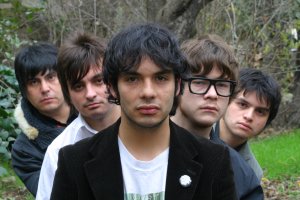 Chilean rockers Los Bunkers released a “Live in Concert” DVD earlier this year. The album was recorded during the five-member band’s sold out show at the Teatro Teleton in Santiago, Chile. In addition to the DVD, the band’s record label Nacional Records, introduced an iTunes audio edition at the same time it released the DVD.

Los Bunkers hit the U.S. scene last year with their North American debut “Vida de Perros.” At the same time, the album struck a chord among Mexican fans. In just the last year, Los Bunkers visited Mexico five times. Last year, the band also played at Vive Latino and they are slated to perform there again this year. “Ahora que no estás” has played on MTV Tr3s, LATV and mun2. Los Bunkers were nominated for Univision’s Premios Lo Nuestro for Best Rock Album.

To listen to the single “Lueve Sobre la Ciudad (live)” from the “Live in Concert” album click the button to hear the podcast:

Click here to receive a free copy of Emotional Branding