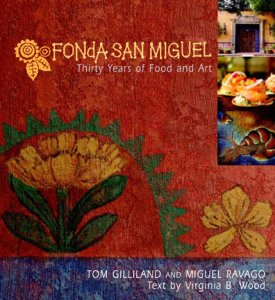 South-of-the-border salads, tapas, and mixed drinks that won’t keep you locked up in a hot kitchen for hours is the promise of a Fonda San Miguel: Unique South of the Boder Recipes for Summer Celebrations (Shearer Publishing, $34.95). Tom Gilliland and Miguel Ravago, owners of Fonda San Miguel restaurant in Austin, Texas with the help of food writer Virgina B. Wood put together a collection of their favorite easy-to-prepare restaurant recipes in the hardcover book, a 2006 International Association of Culinary Professionals (IACP) award-winning cookbook.

“We had a grand dream, little experience, and a lot less cash when we began,” said Gilliland. “I love it as much today as the first day we opened. The title of our cookbook captures the dual focus of Fonda San Miguel, food and art. Distinctive Mexican art and décor is the best complement to authentic Mexican food.” 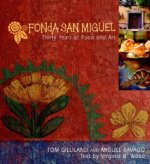 The large and colorful book is filled with photographs of the appetizing dishes and the restaurant’s interior. There are photos of the tropical courtyard, custom made punched-tin light fixtures, some of the hand-painted stuccoed walls of the hacienda-style restaurant, furnitute and distinctive artwork.

Gilliland is a graduate of the University of Nebraska and the Law School of the University of Texas at Austin. He studied law at the Universidad National Autónoma de México in Mexico City, as well as at the American Institute of Foreign Trade (now the Garvin School of International Management) in Glendale, Arizona. A co-founder of San Angel Inn and Fonda San Miguel, Gilliland oversees the front of the house staff and directs the interior design and art collection.

Ravago first learned to cook from his grandmother, a native of Sonora, Mexico. A co-founder of San Angel Inn and Fonda San Miguel, he has specialized in regional Mexican cooking for more than thirty years. Ravago co-authored Cocina de la Familia with Marilyn Tausend in 1997. The book won a Julia Child cookbook award in 1998, and was later published in Spanish.

Wood, a native Texan and a graduate of the University of Texas at Austin, began her professional cooking career as the first pastry chef at Fonda San Miguel restaurant in 1977. She went on to operate her own wholesale dessert and catering company for many years before becoming a food journalist. She is the food editor at the Austin Chronicle.