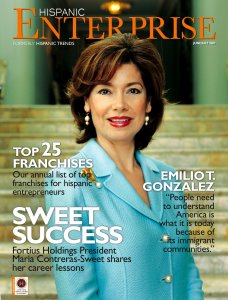 “We were going to wait until 2008, but we could not ignore the great feedback we received from readers to the new name. We have received more letters to our editor than for any previous issue and more new subscribers are calling in signing up for the magazine,” said Mariano M. Faget, publisher of Hispanic Enterprise.

Hispanic Enterprise magazine will continue publishing six times a year. The magazine has a circulation of 125,000. Billed as the “only magazine targeting Hispanic entrepreneurs,” its editorial focus is on tips to grow and manage businesses. The magazine also features success stories, follows the progress of corporations diversifying and getting involved in the Hispanic market and examines Latino culture from a business perspective. Hispanic Enterprise plans to continue its two annual events, the Hispana Leadership Summit and Best in Business Awards.

“Back in 2002 when the magazine started, Hispanic entrepreneurs starting their own businesses were a growing trend. Today, with over 2 million of them and over 120 billion in annual revenues, it’s no longer about the if but the how. We believe the new name will more accurately reflect the editorial content and direction of the magazine,” said Carlos Alfaro, editor of Hispanic Enterprise magazine. “We will continue to serve the needs of our readers by providing beginners with ideas and inspiration, current business owners with tools for managing and growing their companies, lessons from the most experienced professionals in business and advice and courage for those seeking a second chance.”