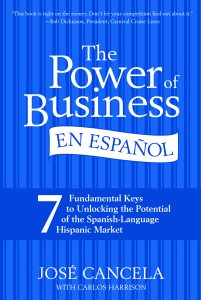 Jose Cancela, a Miami businessman and marketing consultant, discusses his thoughts on the importance of marketing to Spanish-language consumers in the recently published title The Power of Business en Español: Seven Fundamental Keys to Unlocking the Potential of the Spanish-Language Hispanic Market (Rayo, $19.95). The 199-page book outlines the importance of becoming aware of and targeting Spanish speaking Latinos in the United States.

Cancela, owner of Hispanic USA Inc., outlines in seven chapters the concepts he believes will help marketers understand Latino consumers. He focuses on similarities between Latinos, the size, importance and location of the markets, Hispanics’ love for the United States, Latino voting power, religion, family values and buying power, and why he feels it’s essential to reach out to this market segment in Spanish.

In 1979, Cancela began his career as a sales trainee at the Univision station in Miami, WLTV/Channel 23. He went on to run a TV station in Phoenix at the age of 27 and later managed station groups for the Univision and Telemundo television networks. Subsequently he launched a start up, National Hispanic Radio Network, and ran for mayor of Miami-Dade County.

Click here to purchase The Power of Business en Espanol