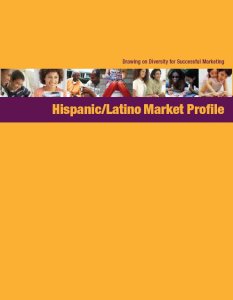 New York, New York – Magazine Publishers of America (MPA) issued a new edition of the Hispanic/Latino Market Profile, a 20-page document designed to help publishers, advertisers, and retailers better target Latinos in the United States. The report is part of a series of profiles of demographic segments in America. The sources for the Profile were the U.S. Census Bureau, Synovate U.S. Diversity Markets Report 2006 and Selig Center’s Multicultural Economy Report 2006.

First published in print and posted online in 2003, the 2007 edition of the Hispanic/Latino Market Profile focuses on market updates and highlights population growth, sending power, and media habits.

The Market Profile indicates that 75 percent of Hispanic adults read over 11 magazine issues a month. It relies on data from a 2006 study by Synovate Research that indicates Hispanics engage more with magazines than with other major media.

According to the report, magazines are the medium that most provide practical advice to Hispanics. Three quarters of Hispanics respondents of the Synovate research agreed TV is more for “zoning or vegging out” than magazines. At the same time, experiences of community and emotional connection ranked higher in driving magazine engagement for Latinos than the general market.

The Market Profiles were developed by MPA “to help marketers understand the evolution of their customers and how they buy products and services.” The Market Profiles address the impact of rapidly growing segments of the U.S. population, offering research on market segmentation, population growth and trends, areas of geographic concentration, language preference, teen and youth markets, magazine readers and reading preferences, as well as top advertising categories, advertisers and agencies.