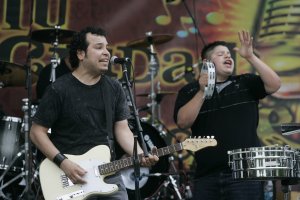 The “Tu Ciudad, Tu MúsicaSM” program will showcase popular local bands. Organizers will pre-select ten bands in each market. These will go on to compete onstage for a chance to win $2,500 in cash and the opportunity to get their music on area radio stations.

Following the launch in McAllen, the showcase will include stops in Dallas, Phoenix, Fresno, Houston, San Francisco, Chicago, New York, Los Angeles and Miami. A panel of three local judges will determine winners of individual competitions based on each band’s live performance, musical talent and crowd cheers.

“Tu Ciudad, Tu MúsicaSM” concerts are free. As part of the showcase, Telemundo Network Group is offering a national sweepstakes for music fans. The grand prize is a trip for two to attend the final concert in Miami.

According to promotional materials, for the last six years BKC has sponsored promotional musical platforms including “We Sing En Español…And English Too,” a program for middle and high school students.