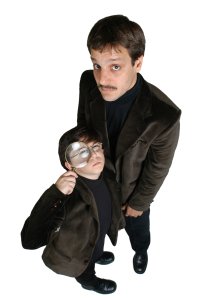 Miami, Florida – Beginning in April 2007 Mega TV Channel 22 will add an Argentinean comedy series to its Miami programming. “Detectives, Brothers & Co.,” stars Rodrigo de la Serna and Rodrigo Noya, and is directed by Damián Szifrón. The Spanish language series will be broadcast in high-definition at 9 pm Thursdays for 10 consecutive weeks.

Franco Montero (Rodrigo de la Serna) is a detective who, after his father’s death, learns he has an 11-year-old half-brother, Lorenzo (Rodrigo Noya). Since they have no other family, the courts rule that Lorenzo must remain in Franco’s custody. Lorenzo, who has a great interest in his brother’s detective work, uses his own detective skills to help Franco solve what was thought to be a dead-end case. From that moment on, Franco brings Lorenzo under his wing, and the two brothers work together in the resolution of various criminal cases.

“Detectives, Brothers & Co.” promises viewers suspense and laughter. In each episode, Franco and Lorenzo solve a criminal case, while engaging in wild shenanigans.

Serna has been an actor since he was 12, working in comedy and drama. Prior to the series, he worked in “Okupas,” “Los Simuladores,” “En el fondo del mar,” “Ciber-six,” “Naranja y media,” “Crónica de una fuga,” and “Diarios de motocicleta.” Noya has been acting since the age of five.