In spite of sluggish housing market, most new construction jobs going to Latinos 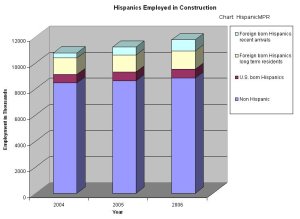 According to a recent Pew Hispanic Center fact sheet, two thirds of all new construction jobs went to Hispanics in 2006. In spite of a sluggish housing market, there was employment growth in the industry last year. The study leads to the conclusion that the construction industry is of great importance for foreign born and newly arrived Hispanics.

Three of every four of these are foreign born Latino workers. At the same time, foreign-born Latinos who arrived since 2000 represented 24 percent of the total increase in employment in the U.S. labor market last year. The Pew Hispanic Center estimates indicate that about two-thirds of the increase in the employment of recently-arrived Hispanic workers is the result of illegal immigration.

In reaching its conclusions Pew staff relied on data from the Bureau of Labor Statistics and the Census Bureau. Most of the data is from the Current Population Survey, a monthly Census Bureau survey of 60,000 households.

Click here to purchase “A Snapshot of the U.S. Hispanic Market”